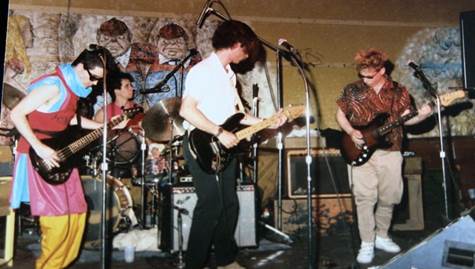 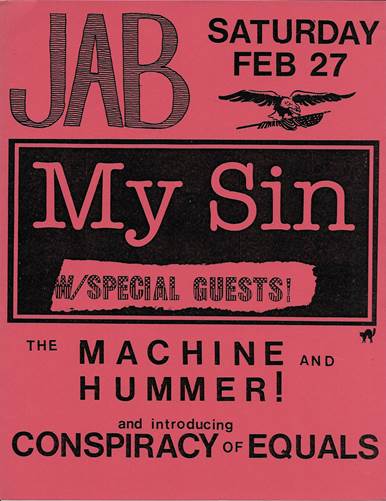 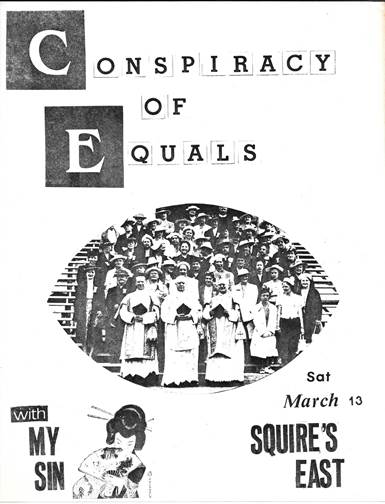 “I remember a gig at Hartwick College in Oneonta, NY. I think My Sin and Conspiracy of Equals were the only two bands. We played first and the audience was really loaded. Our lead guitarist, Josh Heller, had very long hair and a full beard and someone kept yelling “Jerry, hey, Jerry! It’s Jerry Garcia!” Not sure if Nancy Terzian had joined the band at that point. I think Judy Ivry was still singing with us. At the end of My Sin’s set, we joined them on stage dancing and jumping around.

We also played with My Sin at the Jab. I think they were headlining and gave us a break and let us play before them. I think Machine and Hummer might have been on first. Since I played bass at that time, I remember watching Keith Vincelette {My Sin bassist} to rip off some moves. {My Sin’s} “A Man Needs a Uniform” really blew away the audience. Brought to mind seeing “Gang of Four” at Drumlins, one of my favorite bands. Of course, they had Sarah Lee on bass, my heroine.

My Sin wasn’t involved in this particular scene but we were asked to play at LeMoyne College for some mixer. The kids couldn’t drink in the dance floor/stage area but could in a room that looked over the floor. We were on a double bill with Masters of Reality. Not sure how that happened. When we were playing, Scott Sarmiento was floating around in some weird costume but he was alone. We played to an empty room since most of the kids were watching and drinking from that separate room. When the Masters came on, they all came down and started dancing wildly. We fawned over Chris Goss and the band and told them how great they were. They were very gracious to us. I’ve always thought Tim Harrington was an amazing guitarist who probably never reached his potential. Chris Goss, on the other hand, has really become an amazing producer and music person out in the West. Occasionally, many years later, when we were just a little buzzed, we’d listen to the reformed Masters of Reality CD with Ginger Baker on drums. Can you believe Steve Segal used “Domino” in one of his movies!

The scene at Squires was probably the best. Way under the radar for the most part but such energy. We performed there a few times along with Serious Journalism, Machine and Hummer, and My Sin. What a place! A long narrow bar, small, crowded with a small stage at one end but at one point it was the place to be.  Since several of us had been art students at Syracuse, many of our creative friends would show up on Sat. night. One night when Curtis Seals was in the band, we joined My Sin on stage for “Sun, Zoom Spark.” We also played with My Sin when Sal Stassi was the drummer.

We were never a headliner at the Lost Horizon. Tom Kenney, who eventually became Sponge Bob’s voice, and his band members were never in our circle. We played the Horizon on a Thurs. night and I remember there being maybe 20 people at the tables. The bartender told me I could sing really well and should dump the rest of the band. HA! That wasn’t ever going to happen.

We played a great set at the Firebarn when Nancy was in the band. Maria Pagano, a local artist, had been working with us on the “Corporate Takeover” song.  She created this amazing costume of huge foam dollar bills and walked around while we were singing the song. Went over really well.

I do remember a weird performance for Halloween. We were on the same bill as the Nuclear Accidents at some place downtown, the Carousel, maybe? We had been working with a woman singer and she showed up in a full “Got Milk?” cow costume and never took off her cow head because I don’t think she wanted anyone to know she was singing with us. She was involved with some other people in the music scene in Syracuse and I think she was embarrassed to be with us. She never could “get it.” Didn’t have the creative spark to get a sense of what we were trying to do. Just wanted us to tell how to sing the songs. She never came back to our practices after that. A week later this club closed down.”

“(Nancy) was a smart, lovely woman with a soaring voice.  We did a duet on ‘Sun Zoom Spark’ at the Firebarn, one of those humid horrible Syracuse summers, back in the day.  That was when we had a complete band, so the song could go for twenty minutes with everybody getting whatever solo they wanted.  I think I lost five pounds sweating that night.  No exaggeration." 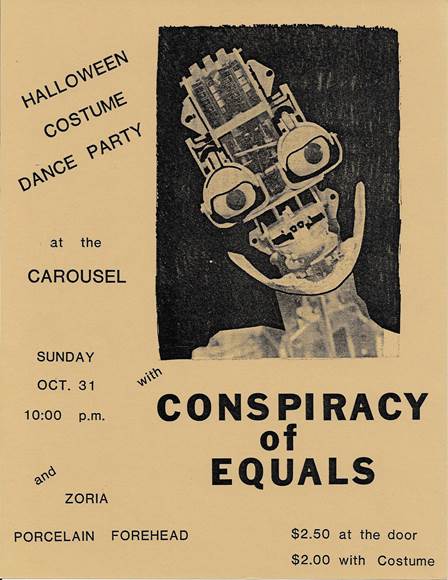